Marlee Morris are going to dance at the Mt Claremont Farmers’ Market on Saturday 11th of June from 9AM.

For some videos from the last time we performed there see – videos.

We (Marlee Morris) had a busy day on the 1st of May.  We helped the Perth Morris Men “dance of the Sun” at Kings Park – see photos.  After Breakfast, we went up to perform at Moondyne Festival.  See photos.

Coming up in the next month we will be dancing at Mt Claremont Farmers Markets on the 11th of June and dancing at Cottesloe (between Barchetta and Blue Duck) on the 18th of June with the Fair Maids and others.  For some photos of the last dance out with the Maids – see photos.

If you are new to Marlee Morris and are interested in joining us – please contact the Squire on 0400 731 049 or via email marleemorris@morris.org.au

In these strange times Marlee Morris has been fortunate enough to have danced out fifteen times during 2021.  Below is a dot point summary of places or event that we danced at:

END_OF_DOCUMENT_TOKEN_TO_BE_REPLACED

The Fair Maids of Perth have once again invited us to join them beside the sea at Cottesloe for a spot of dancing.

We have been accepted again to perform at the South Fremantle Festival of Lights on Sunday 7th of November.  We are performing in the street between 5 and 6 PM.

Some great gigs on the horizon.  On the 16th of October we are dancing at Hillary’s Boardwalk for “Folk on the Water 2” – for more details of our performance – see Event.

Next gig will be the Festival of Lights in South Fremantle on Sunday 7th of November between 5 and 6PM.  We had great fun dancing there last year and are pleased to have been chosen to dance there again.  For some photos from last year see photos.  For some videos – see videos.

A few weeks later we are dancing at Rosalie Village Fete – time to be confirmed.

Eight days later we are wishing one of our dancers farewell by dancing out in Crawley near Bayside Kitchen between 11 and 12 on Sunday 28th of November.

We will wind up the year by dancing (& eating and drinking) at and near PICA Bar in Northbridge on Wednesday 15th of December from 6:30.

Marlee Morris have been invited by the Fair Maids of Perth to join them in a dance out at Cottesloe.

The Maids would like to invite Perth Morris Men and Marlee Morris to join them in another Jolly Frolic By The Sea, and lunch at the Albion on Saturday morning, 4th September.
We could follow the same format as last time, i.e. meet at 10.15am for a 10.30 start, dancing between the Blue Duck Cafe and Barchetta, in a large vacant concreted area overlooking the beach.  Last time, we danced one dance in turn until we felt like a break, the the same again until about 12 noon, when most of us went for lunch at the Albion Hotel in Cottesloe. 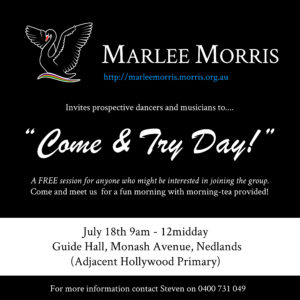 We have been successful after submitting an application for Moondyne Festival.  We are now dancing at 11:50 and 3:30 – see Revised Program